It’s probably fair to say that I’m a bit of a science nerd. In fact, it’s a little more than that. I think that science is essential to how we develop as a species. It is an ongoing search for truth and understanding. It is how we rise above our own parochial views and engage with the bigger picture of the world around us. So when science comes under attack, I’m not going to just stand idly by. END_OF_DOCUMENT_TOKEN_TO_BE_REPLACED

There’s something fascinating about the moon. It’s traditional among astronomers to grumble about the moon, and the full moon in particular, as the massive amount of sunlight that it reflects makes it nigh on impossible to see anything else in the night sky. But, personally, I’m a big fan of the Earth’s partner in crime. And so I was keen to make the very most of last night’s spectacular lunar eclipse. So much so that Molly (my Labrador) and I decamped into the garden for the night. Here’s our set up… 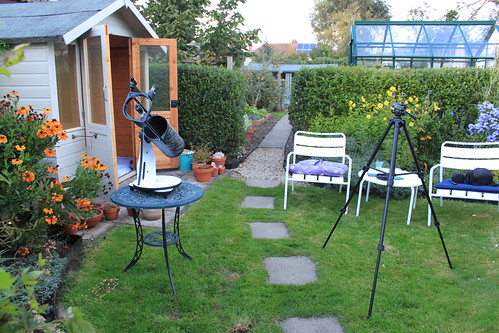 END_OF_DOCUMENT_TOKEN_TO_BE_REPLACED

After a run of frustratingly cloudy weekends, last Saturday finally brought clear skies. And so it was with some enthusiasm that we opened up our astronomical society’s observatory for a public viewing session. We had to go for quite a late start, as the sky didn’t even begin to get dark until 10.30pm, but it was most definitely worth the wait. END_OF_DOCUMENT_TOKEN_TO_BE_REPLACED

It was a lovely clear night on Saturday and I had the good fortune to be on the rota to open up the observatory for the evening. So wrapped up in several layers of thermals, fleece and hats, my fellow stargazers Alison, Stephen, Toby and I spent a very pleasant few hours gazing up at the night sky. END_OF_DOCUMENT_TOKEN_TO_BE_REPLACED

As I think I’ve mentioned before, I recently joined the Bristol Astronomical Society. The Society is lucky enough to have a small observatory just outside Bristol and John, who manages the observatory, was kind enough to show me how everything works. This means that I’m now allowed to help out at the observing sessions that the Society runs on Saturday nights.

The observatory consists of a 12″ telescope in a small dome and an 18″ telescope mounted on a concrete plinth outside. In addition to these fixed scopes, members of the club generally take along their own equipment. Some of the more experienced among them have some pretty serious pieces of kit, including computerised mounts (where you just type in what you want to look at and the scope orients itself automatically) and telescope-mounted cameras.

Now, on this occasion, I’d remember to take my own camera along. So I seized the opportunity to snap some photos of my fellow astronomers doing their thing. Here we are setting things up. You will perhaps note that we are somewhat early in getting ready, given that it’s not at all dark. But it’s a lot easier to get telescopes, cameras, laptops etc. connected in the daylight.

As the sun disappeared over the horizon, a certain air of expectancy descended upon us. We began to squint towards the southern sky, where the first stars would soon make their appearance.

And we took this final chance to tweak a few settings…

As darkness fell upon us, things got serious. And as you can see, I wasn’t joking about the serious amount of kit that some members bring along. Bob here uses his telescopes and cameras to take some seriously fantastic images of deep sky objects.

And I can personally vouch for the fact that it is a lot easier to put a webcam on your telescope’s eyepiece and look at the stars on your laptop, than to spend the entire night hunched over the telescope itself. This chap’s got it sussed.

Unfortunately, before it had even got properly dark, the clouds came in and obscured the heavens above. But not before we’d seen the planets Mercury, Venus and Saturn, several satellites and the International Space Station. So even though it was cut somewhat short, we had a fairly decent night at the observatory.