It was already a glorious day when I woke up yesterday morning, so I decided to head out with Molly for a quick walk on the beach. There was hardly a soul around, so we practically had the place to ourselves. 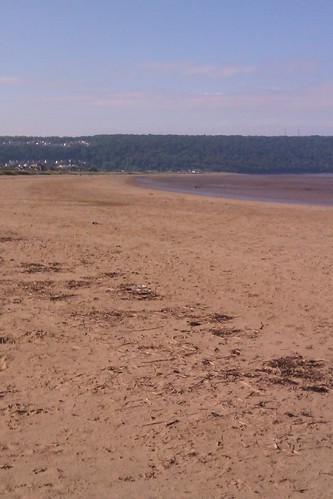 END_OF_DOCUMENT_TOKEN_TO_BE_REPLACED

We had a relatively free day on Saturday, so decided to head out to the beach at Sand Bay near Weston-super-Mare. It was a bit of a grizzly day, but the grey clouds and grey sea made for a very atmospheric view across the Bristol Channel to Wales.

I was feeling quite energetic, so Molly and I did a bit of racing up and down the beach, while Natalie looked on in bemusement. Sand Bay is a very dog-friendly beach and possibly one of Molly’s favourite places. And I’d have to admit a certain fondness for it, too.

As we were wandering back up the beach, I noticed that quite a few other people had had the same idea as us. Stretched out along the mile or so of sand were several small groups of people – and dogs. Little tribes, much like our own, making the most of this grey day by the sea.

Our Labrador Molly loves playing on the beach. And at this time of year, when the weather is OK-ish and the beaches aren’t yet particularly crowded, we all like to go for a nice walk by the sea. Admittedly, with the Severn estuary having one of the highest tidal ranges in the world, the sea can often be quite a way away. But the beaches are long, sandy and have plenty of room for throwing a ball.

There’s also usually something interesting going on. Here’s Molly the other weekend, surrounded by kitesailors.

The best thing about playing on the beach with Molly, though, is her sheer enthusiasm. When I throw the ball, she hares after it like a bat out of hell. And instead of slowing down when she catches up with the ball so that she can pick it up gracefully, she continues full pelt and hurls herself bodily at the ball with unrestrained glee. Sand flies in all directions as she comes to an ungainly, and not very well controlled, stop in a giant, four-pawed skid. She beams a sandy grin, her ball lodged firmly in her mouth.

Here’s what the aftermath looks like. It’s difficult to see the scale in the photo, but this skidmark is about thirty feet long.

Having retrieved her ball, she turns and races back towards me. She picks up speed as her paws find grip in the soft sand. Her eyes gleam as she sees me and she puts her head down, all effort directed to reaching me (purely so that I can throw the ball again) as quickly as her body – and air resistance – will permit. I can see her leg muscles pumping away like furry orange pistons. She continues to accelerate even as she approaches where I’m standing. There’s no way she can stop in time. I close my eyes and brace for impact.

Sunset at Sand Bay, just north of Weston-super-Mare in Somerset. I love being on the beach as the sun goes down. Everything goes very quiet when darkness falls, as if the world is getting ready for bed.

The calm before the storm

I went for a walk on the beach this morning with Molly and we watched the storm clouds creep towards us from way out in the Atlantic. A short while before the rain hit, the skies cleared a little and an enormous rainbow appeared. I managed to get this shot with the phone on my camera before the raindrops started and we made a dash for the car.